Home > About Us > Our History

Holy Trinity was founded in 1869 by members of Vicksburg's first Episcopal parish, Christ Church, prompted in part by desire for a larger place of worship ore convenient to the growing, southern section of the city. The lot purchased for the new church by founder John Alexander Klein, longtime diocesan treasurer, was seven blocks southwest of Christ Church. Within weeks the congregation erected a small wooden chapel on the site in order to hold worship. The parish called the Rev. William Wilberforce Lord, D.D., then in Charleston, as their first rector. Dr. Lord had previously served as rector of Christ Church during the siege of Vicksburg. He laid the cornerstone at Holy Trinity on October 31, 1870 in a Masonic ceremony.

Over the next decade, the congregation worshipped regularly in the chapel while raising funds to build the church. In 1878 a yellow fever epidemic struck Vicksburg and three of the founding members of Holy Trinity (William A. Fairchild, D.W. Flowerree, and Dr. P.F. Whitehead) died. The building project was delayed six months while the congregation mourned this loss.

The congregation worshipped in the new church building on March 28, 1880 and celebrated the completion of the building and also installation of the first stained glass windows (the Reconciliation windows in the west wall and the sanctuary windows in memory of the Fairchilds, Flowerrees, and Dr. Whitehead).

Dr. Lord resigned in 1875 and the Rt. Rev. William Forbes Adams, D.D. came to Holy Trinity. During his tenure the parish occupied the new church and retired much debt. The church building was finally consecrated on June 24, 1894 after completion of the interior work, furnishing, and payment of the final construction debt. 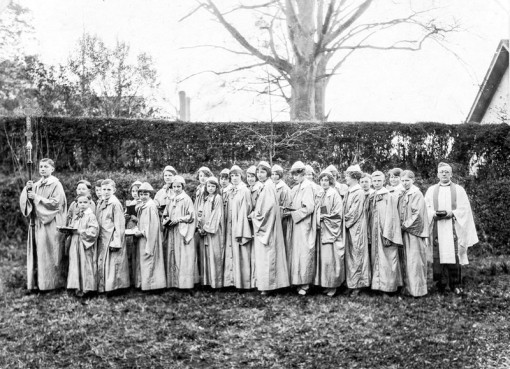 Acolyte, youth choir and rector in the early 20th century

The Church of the Holy Trinity

We're here to welcome you. Please stop by during office hours: Monday-Friday,  9 a.m. to 3 p.m.

Our Mission is to proclaim the gospel and the love of Jesus Christ by sharing His spirit in worship and in the ministry to the needs of our congregation and our community.